A Prelude to ‘On Bhagavad Gita’ Series

Bhagavad Gita is closely ever relevant to every human who has his body, senses, mind, intelligence and ego as well as the world of objects surrounding these.

Harih Om Tat Sat. Here now I am beginning to discuss the great ‘Administrative Treasure Trove’ Bhagavad Gita. First, let me tell you that Bhagavad Gita is no religious text. It is a normal dialogue between two fighters, Krishna and Arjuna, about fighting itself. Both were in the midst of the unprecedented Mahabharata war fought 5000 odd years ago in Kurukshetra, in Haryana State, India.

Strange were the circumstances that led to the historic dialogue. Somehow Sage Vyasadeva penned it in full, together with all other events of the war. In 1,25,000 Sanskrit verses, the great historic narration, Mahabharatam, remains a matchless marvel even today.

War being the most terrible human activity, coming under public administration, the discussion to dispel grief, doubt and fear from Arjuna and engross him in activity, becomes relevant to all active and interactive people everywhere at any time. I believe you will be with me to take this discussion ahead, aimed at enlightening the reader and thinker appreciably.

This is actually a letter; I want you to read it as personal communication. Do not think it is short or long. It is something I wish to share with you. Treat it as an exchange between us, as happened between Krishna and Arjuna. I represent Krishna and you all Arjuna too!

Knowledge greatest persuasion for all

Knowledge is the strongest persuasion in human life. It enriches, empowers, elevates and expands the mind. Resultant benefits are untold. None can and will resist knowledge. In fact, the performantial skill and merit of any one consist in the knowledge he has. Knowledge is the greatest human wealth. It is also the greatest strength, potential and benefactor. Let us proceed with hope, confidence and assurance.

Bhagavad Gita is not a sudden thought or dialogue. It is the destined outcome of a long thought process, which took shape in our holy land right in pre-historic times. It revolves around human life embodying persuasions and values, goals, their effective pursuit and success.

Human beings are unlike the other creations upon the earth. The senses to perceive and interact with the objects around are common to all beings in the world. But the mind and intelligence to collect and collate the resultant impressions, study and analyze them are exclusive to humans. Unless this distinction is valued and employed consistently, human life will not become meaningful and fulfilled.

Somehow, the people inhabiting the subcontinent of India were conscious of this fact and took up the pursuit of thinking and evaluating life right from the beginning. This is how we have the most ancient Vedas, in which thoughts and enquiries about life, the world around, the values and goals to be cherished and pursued, together with allied matters are discussed in very clear terms and stable conclusions arrived at.

‘May we have the right leaders to guide us. May noble thoughts enter us from all directions. Let us walk together, think together and progress together. Brahman, the Supreme Reality is the only factor to be known, its knowledge makes life full and complete.’ Thoughts and concerns of this kind are clearly expressed in Vedas.

Know what is life to live well

What do you understand from this? You will not be able to live well in this world making your life meaningful, helpful to one other and attaining fulfilment, unless you think about life in sufficient detail. I have asked so many people whether they have thought about what life is. Invariably the answer was a clear ‘no’. Unless you know about your life, how can you make it good, noble, great and fulfilling?

This is how the Indian thinkers were dedicatedly given to reflecting and enquiring about the world surrounding them, equally their own personality and the interactions between the two. They pursued the thought process with commitment and dedication, and naturally reached the destined goal and fruition. Vedas, particularly the Upanishads, are a living memorial to what they did, found and were established in.

Thus, Upanishads became a valuable treasure of knowledge in the country ever since. All good people, particularly thinkers, took the trouble of studying the Upanishads and pursuing their message and findings. Krishna also was taught the Upanishads, though a little late in his life. He was born in the palace of Mathura, but soon after birth he was taken to Vrindavan for security reasons and in his place a baby girl was brought back. It is this girl that Kamsa, his cruel uncle, attempted to kill by hitting on a rock. The earlier babies also born to his sister Devaki, Krishna’s mother, were killed by him in the same way.

Somehow, the girl slipped from Kamsa’s grip and said in a stern voice “your enemy is elsewhere. Search him out if you can”.

Thus, Krishna grew up in a cowherd settlement with other cowherd boys grazing cattle and playing freely with Vrindavan boys.

Kamsa’s effort to reach Krishna and destroy him failed one after the other. So, he decided to invite him to Mathura to see a big bow sacrifice. His plan was to kill Krishna right at the entrance of the arena or sacrificial hall, where a huge tusker was posted. Krishna playfully disposed it off. Next was a powerful wrestling bout.

Placing the tusks on his shoulders, he walked to the wrestling arena. Killing the adversaries with lightning strokes, he took a leap to where his uncle sat on the gallery. Lifting Kamsa up in his arms, he threw him to the wrestling platform and fell over him. Kamsa’s life forces left the body instantly. Krishna went straight to release Ugrasena, Kamsa’s father. Krishna restored the throne of Mathura to him.

Thus, only when the atmosphere was peaceful and congenial, Vasudeva, Krishna’s father sent him to Sandeepani school for the customary learning. Vedic Upanishads were a part of his study and knowledge.

You may wonder why I say all this. It is to point that the Upanishads were a part of our regular learning process. They provide a timely significant exposure of one’s inner personality, where the mind, intelligence, ego and the resources they hold constitute a very important subject of study.

In the warfield dialogue, Krishna makes references to the Vedic treasure. He even cites the Upanishadic verses, indicating clearly that his dialogue with Arjuna was not a casual one. On the other hand, it conveyed the scintillating essence of the immortal Upanishads, where the imperishable Soul, referred to by the term ‘I’, becomes the fulcrum and pivot of instruction.

Is it clear to you now that Bhagavad Gita is an immortal and eternal exposition of the Supreme truth of human life, the values and goals it embodies and emphasizes?

It is meant to enlighten, empower and lead every man and woman to live in this world confidently surmounting all challenges and to go forward with hope, stability and resolve. Tell me now whether the enlightenment and empowerment Bhagavad Gita instils are indispensable in our life anytime, anywhere.

In the first message on Bhagavad Gita, I have portrayed some events subsequent to the Gita dialogue, bearing upon the two distinct personalities, Bhishma and Drona, which will readily reveal how their leading presence on the opposite camp was trumpeting the need to fight the righteous war. What more? Despite the visible fact that they were standing on Duryodhana’s side, their hearts and minds were bent on blessing Yudhishthira and guiding him to defeat Duryodhana, the unmendably wicked fighter!

Read, reflect upon and assess yourself how the whole historic dialogue has its continuing relevance to the life and interaction of people even today.

“This is actually a letter; I want you to read it as personal communication. Treat it as an exchange between us, as happened between Krishna and Arjuna. I represent Krishna and you all Arjuna too!”

“Bhagavad Gita is not a sudden thought or dialogue. It is the destined outcome of a long thought process, which took shape in our holy land right in pre-historic times.”

“Bhagavad Gita is an immortal and eternal exposition of the Supreme truth of human life, the values and goals it embodies and emphasizes.”

“As long as life is an interaction between the individual and the rest of the world, Bhagavad Gita becomes irresistibly relevant and immensely useful.”

“Read, reflect upon and assess yourself how the whole historic dialogue has its continuing relevance to the life and interaction of people even today.” 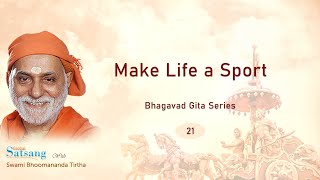 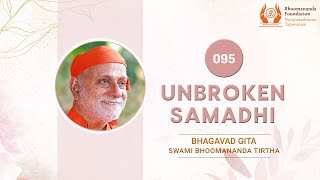 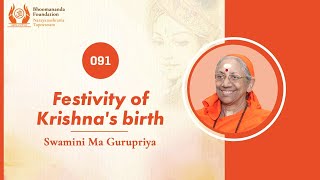 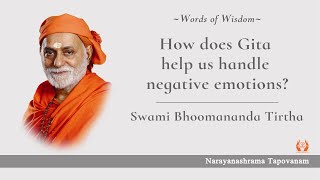 Be What You Are

Kathopanishad - A book of Saadhana

Song Of The Soul

Or add to an existing playlist

Select the e-Services below:

The information highlighted in red is required to complete the subscription